Grubs are the larvae of certain beetles, which are causing an increasing amount of lawn damage in recent years.  White grubs (June Bug, or Japanese Beetle or European Chafer larvae) have a C-like formation to their body and have 6 legs with a brownish head.  Fully grown, they are approximately 4cm long and they mature usually in the Spring time of the year after having hatched the previous Summer and overwintered in the soil.  While grubs themselves can cause damage to lawns by feeding on the roots of the grass, the most damage to a lawn is seen when predators like skunks and crows turn over the sod bit by bit to access the tasty morsels.  This activity tends to be most prevalent in the Spring and Fall when the grubs are feeding closer to the surface of the soil.

In the case of grubs, an early sign that you may have them in your lawn is a general browning of the lawn which grows in size, even though surrounding areas are much greener. Also, a tell-tale sign that they are in your soil is the torn up turf from skunks and birds.  Both the primary and secondary damage is most notable in the Spring or Fall of the year. 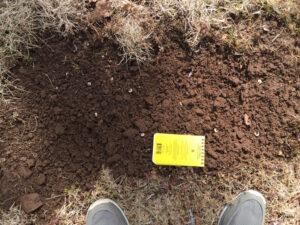 How do I avoid them ?

The best method to minimize the primary damage to the turf is to maintain a well fed, dethatched lawn that is mowed at an appropriate height of 2.5 to 3 inches.  A healthy turf is better able to withstand some damage since there are many healthy roots to make up for the damage of a few affected ones. Nematodes (microscopic worms that feed on soil dwelling insects) can also be helpful in minimizing grub populations. However, because their success rate is dependent on many environmental factors, they are best thought of as a method of prevention rather than cure.

How do I get rid of them?

Should the damage (either primary or secondary) be severe enough to warrant an attempt at controlling the population both this year and potentially in subsequent seasons, it is recommended that a grub control product be applied in the June – September timeframe.  Grub control applied in early Spring or late Fall is unlikely to be successful at killing the grub due to their size and unpredictable proximity to the surface of the soil.  However, the real gain in applying the appropriate grub control (Acelepryn or Merit) in the June-Sept timeframe is that either product is extremely effective at wiping out the new populations of grubs that hatch mid-summer.  All baby grubs feed on the grass, which is holding the insecticide, so it is an effective way of delivering insect control that has the ability to wipe out 99% of the existing grub population.  (Acelepryn has the added advantage of being non-toxic to birds, bees and mammals).

It is important to try to eradicate  grubs from your lawn once their presence is detected since the life cycle can continue on ad infinitum. Once they mature and mate, their flying range is limited and they basically drop their eggs in the same area where they pupated.  Ceasing this cycle with the help of properly applied chemical controls can help prevent  your lawn from being torn up each year.

Proper Water Flow Around Your Home

The Benefits of Enriching your Property’s Landscape